The valve train sees many benefits from the use of Dry Film Lubricants. All of the parts are minimally lubricated by engine oil. Consequently, excessive wear is always of concern, especially at start up or after the engine has been sitting for an extended period. By using an Extreme Pressure Bonded Lubricant we can provide protection well beyond that expected from even the best motor oils. The primary components to be coated are the Cam, Lifters, Push Rods and Rocker Arms (Valves will be dealt with separately). Normal lubrication is provided by a film of oil that is either pumped to the contact point or is splashed onto the part. In either instance oil film breakdown is of concern. By permanently bonding a lubricating coating in place we enhance the ability of the oil to lubricate and provide additional lubrication even after the oil film fails. Typical motor oils will fail at pressures below 10,000 psi. Properly formulated bonded lubricants can withstand pressure in excess of 350,000 psi.

The Dry Film Lubricant functions in two ways. First, it acts as an “oil retaining material” rather than an oil shedding material, as are some materials like Teflon. This means that it reduces the ability of a small amount of oil to flow rapidly over the coated surface. In doing this it actually reduces friction as the remaining oil slides between the mating surfaces very easily and allows the parts to move much more freely. This action also reduces the likelihood of the oil film being “pushed” off the surface. A secondary benefit to this action is that it allows the oil to absorb more heat, thus helping to cool the parts more efficiently. The enhanced sliding action can be demonstrated by the way a “Slip and Slide” functions. This slick piece of plastic does not allow a body to slide over it until a film of water is pre sent. A small amount of the water is retained by the plastic surface as well as by the skin and clothing of the “slidee”. With water running over this slick surface, a body will very easily slide for an extended distance. If the surfaces shed water, the effect wouldn’t be as dramatic. The layers of water moving at different speeds act like little “rollers” that allow free movement. The Dry Film Lubricant creates the same effect by retaining a small amount of slower moving oil on the coated surface, thus actually allowing easier movement of the parts.

The Second function takes over when the oil film would normally break down either due to pressure or the effect of high heat on the lubricant and allow metal to metal contact. The bonded coating does not “break down” nor cold flow at higher pressure nor is it significantly affected by high temperatures, thus maintaining a lubricous film between the mating surfaces inhibiting metal to metal contact. This film provides a second layer of protection that normally will lubricate at loads in excess of the “crush” or deformation point of the base metal. This is especially critical at start up when a well defined mating surface is desired and excessive wear due to lack of lubrication can do significant damage. 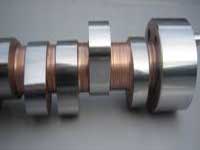 Camshafts especially benefit from the application of a Bonded Lubricant at start up where a cam can be damaged if the lubricating film is not maintained during break in. The use of a Bonded Lubricant can in many instances eliminate the need to break in the cam using low pressure valve springs. When we combine these features not only do we see better mating surfaces, we can also expect to see less wear, reduced friction and attendant power gains as well as longer part life. In addition, this can allow the Performance Engine Builder to reduce the amount of oil flowing to these parts thus directing more of the oil flow to the crank assembly. A variety of lubricating coatings are available for these surfaces.